About a month and a half ago, Paul came home from a church meeting and mentioned that the bishop (what we call the leader of our congregation) had asked if I would be willing to head-up the committee for our ward Christmas party this year.  My first reaction was "No way!" but after some consideration of the fact that if I didn't do it someone else would have to and as I started to think about the other potential people in the ward to head the committee I realized that I was a very reasonable candidate since I have the fewest kids, I am a SAHM who-while busy-has enough time to tackle such a responsibility, my calling as gospel doctrine teacher isn't all the demanding, etc.  So I said I would do it.
I got really lucky in that I had an AMAZING committee of women who helped me put everything together and had super ideas and input.  One of my committee members - my friend Hailey - pretty much took on all the decor herself when another committee member had to back out due to a surgery.  We went with a loose Polar Express theme (tickets for invitations, a "believe" sort of message, and a train set for decorations) and it turned out really well.  Hailey came up with beautiful centerpieces and arranged everything so beautifully.  We were able to get 5 6+foot live trees for $15 each which we decorated with Christmas lights and then gave away at the end of the night. 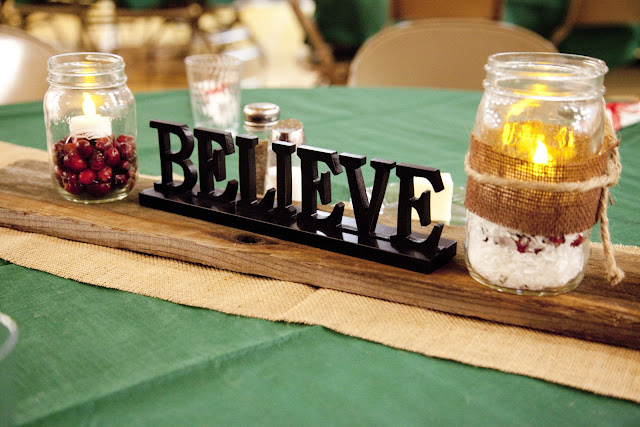 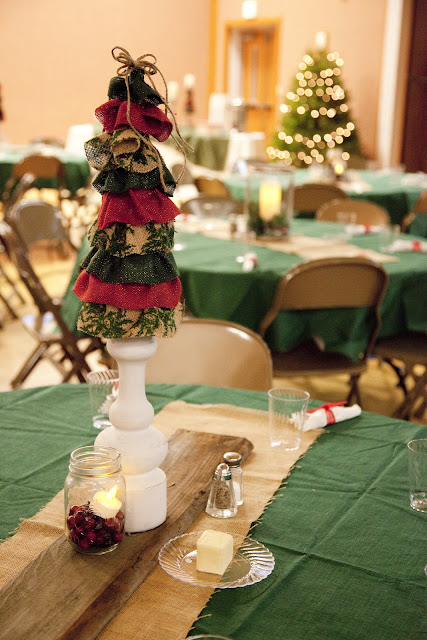 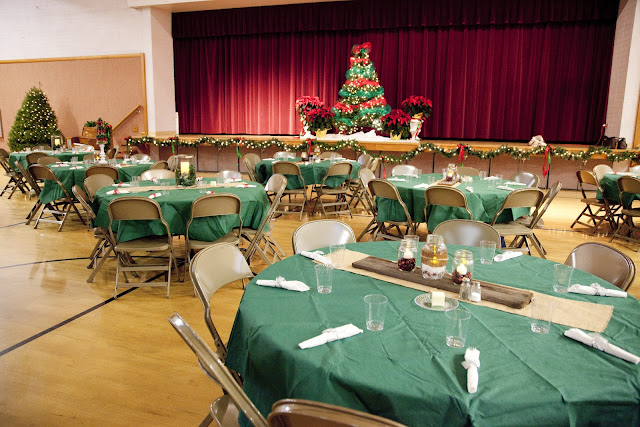 There is an older couple (actually, they really aren't all that old but all their kids are grown so that is what I really mean) in our ward who have beautiful Santa and Mrs. Claus costumes and they did a great job with all the kids.  I was all about delegating for this party so I asked our Primary President to print Christmas coloring pages and order small boxes of crayons (like the kind you get at restaurants) for Santa to give out rather than candy canes since we had Santa come before dinner and I wanted the kids to have something to do before the food was served and not spoil appetites with peppermint sugar sticks.  Clara did much better with mom and dad in the picture with her.  I may look put together in this picture but I seriously was running all night long managing food levels and making sure the little program we put together happened, etc.  I literally dashed from the kitchen and tore off my apron to take this picture, then headed right back in.  Paul was such a huge help and played with Clara and engaged with our friends all night while I was all frazzled. 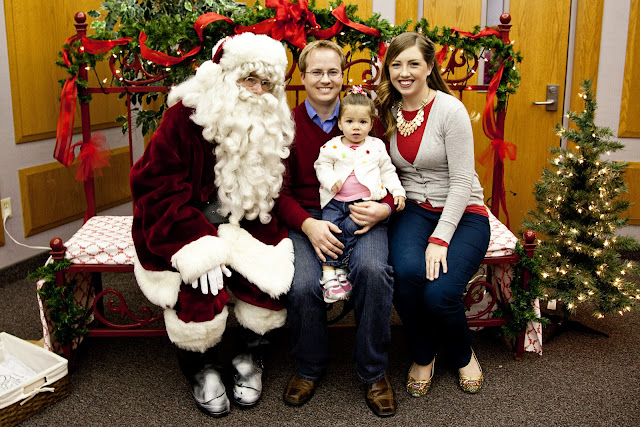 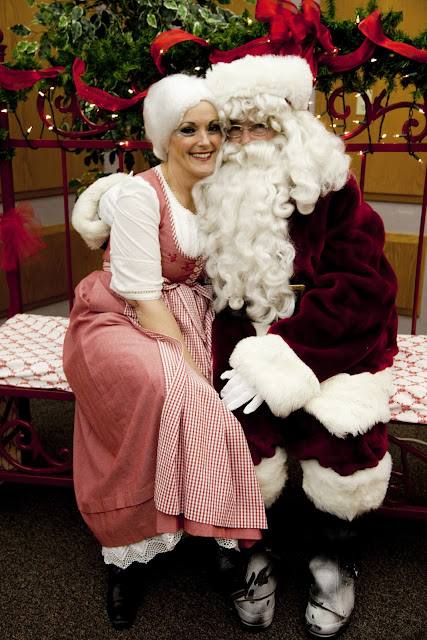 We had a good turnout - we were planning for 350 and by my estimate (based on numbers of chairs that we put out) we had almost 300.  The main dish was Barbeque Beef Brisket (my mom's recipe that she got years and years ago when we lived in St. Louis, MO from a guy in their ward who my mom always describes as "a bachelor").  It is SO easy and SO yummy and my mom has made this probably over a hundred times, especially when we have large dinner parties.  I'm including the recipe at the bottom of this post.  I pre-ordered 90 pounds of brisket from Costco (a full crate of meat actually) which meant that I was charged $3.99/lb instead of $5.99/lb (which is what they sell individual briskets for).  Then we farmed out the cooking of the briskets along with the ingredients and recipes to various ward members since we needed a number of ovens but we wanted uniform results.  It worked out great.  We also had baked mac & cheese from Costco's deli - I seriously love this stuff but this was the one thing we had too much of, although my estimates weren't too far off.  I bought 30 pans of it and we ended up with 6-8 leftover I think.  For vegetables we had orange-ginger glazed roasted carrots and french green beans tossed with lemon juice, butter and sea salt.  There were also rolls and for dessert we set up a table with hot chocolate and cupcakes.  The cupcakes (chocolate/chocolate and white/white) were just from Safeway (a local grocery store) but they were actually quite good and I had ordered old-fashioned peppermint sticks to stick in them so that they would be "North Pole Cupcakes" and that made them look extra fancy. 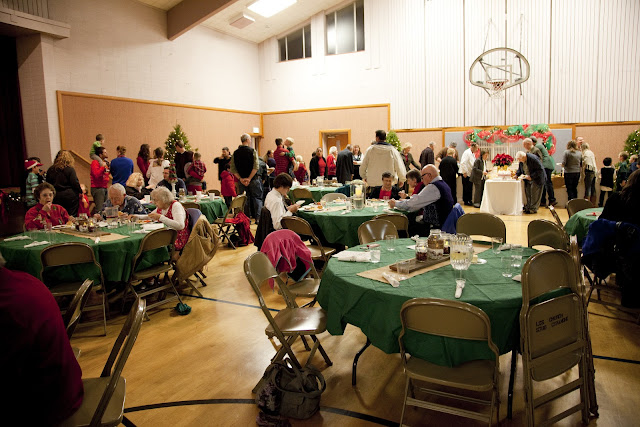 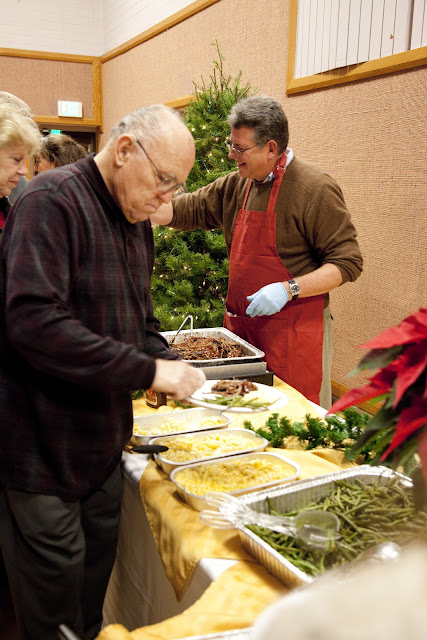 One of the families in the ward brought this incredible toy train set up for part of the decor which gave the kids something fun to look at before and after dinner.  The Young Man in the blue jacket is Evan and he is our home teacher and made sure that the train kept operating in the event that little fingers derailed it. 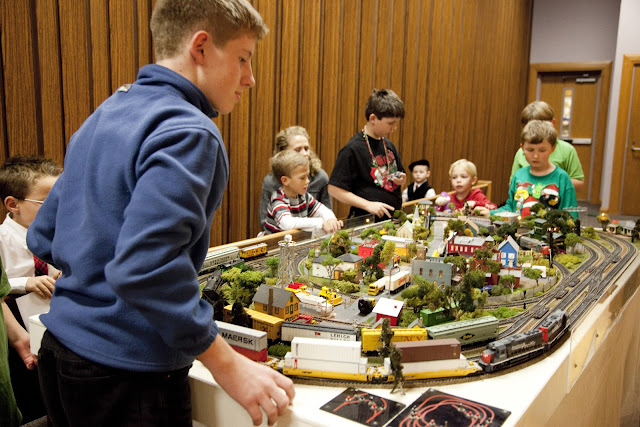 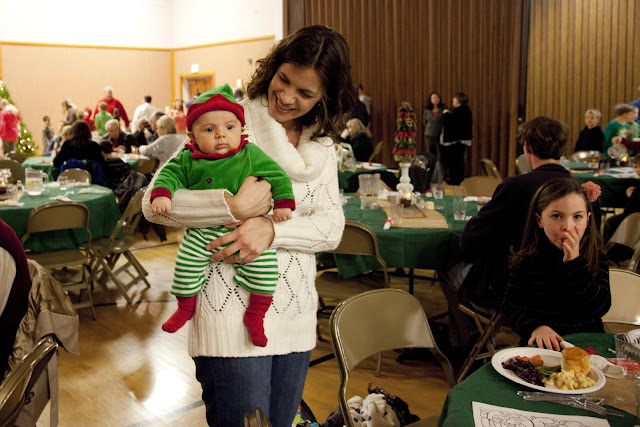 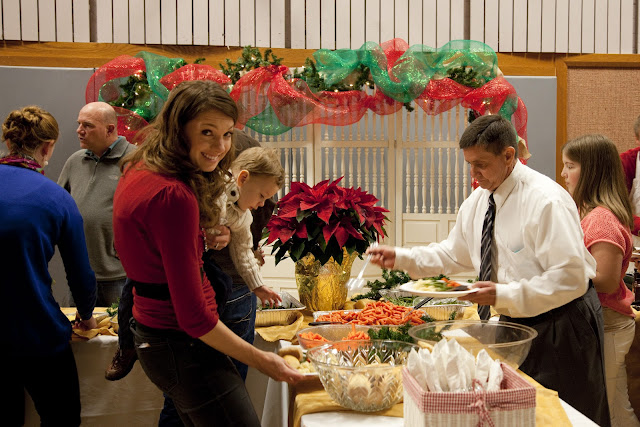 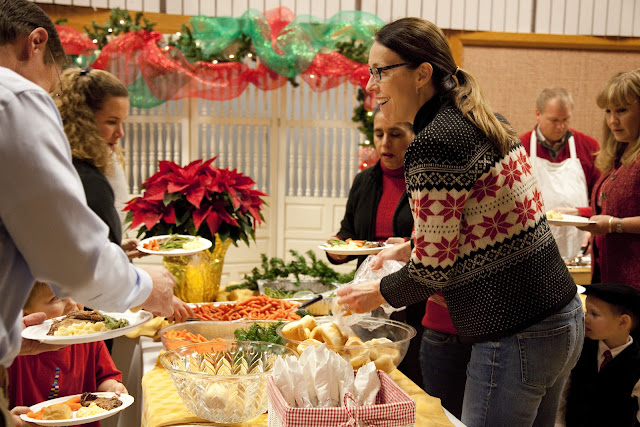 I had so much amazing help and I couldn't have done it without some of the women in the photos above.  A number of people spent Saturday morning at the church helping to decorate, my committee members worked so hard getting things together beforehand, and we had such great help in the kitchen getting all the meat sliced as it was received and making sure the serving tables were never empty.  It was EXHAUSTING being in charge of such a large event (remind me to never, EVER agree to taking on this responsibility again) but I was very pleased with how the evening turned out and that there was such a feeling of friendship and love and Christmas at the party. 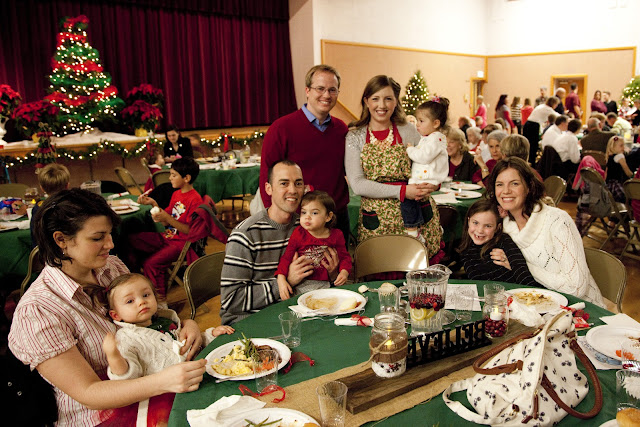 Moisten meat with Worcestershire sauce. In a little bowl, mix 1 teaspoon each of the garlic, celery, and onion salts, with 1 teaspoon of the sugar.  Rub in dry ingredients. Marinate overnight. Repeat process with the remaining spices the next morning. Place meat in aluminum foil allowing plenty of room for meat to steam inside. Bake at 250 degrees for one hour for each pound of meat. Remove from oven and tear away foil. Pour off broth. Pour sauce over meat. Return to oven uncovered and bake one more hour at 350 degrees.  Remove from oven and slice to serve.

* All of the briskets we cooked were actually between 8-10 pounds - you just need to make sure to increase the amount of your sauce and spices accordingly.
Posted by Amy at 9:57 PM 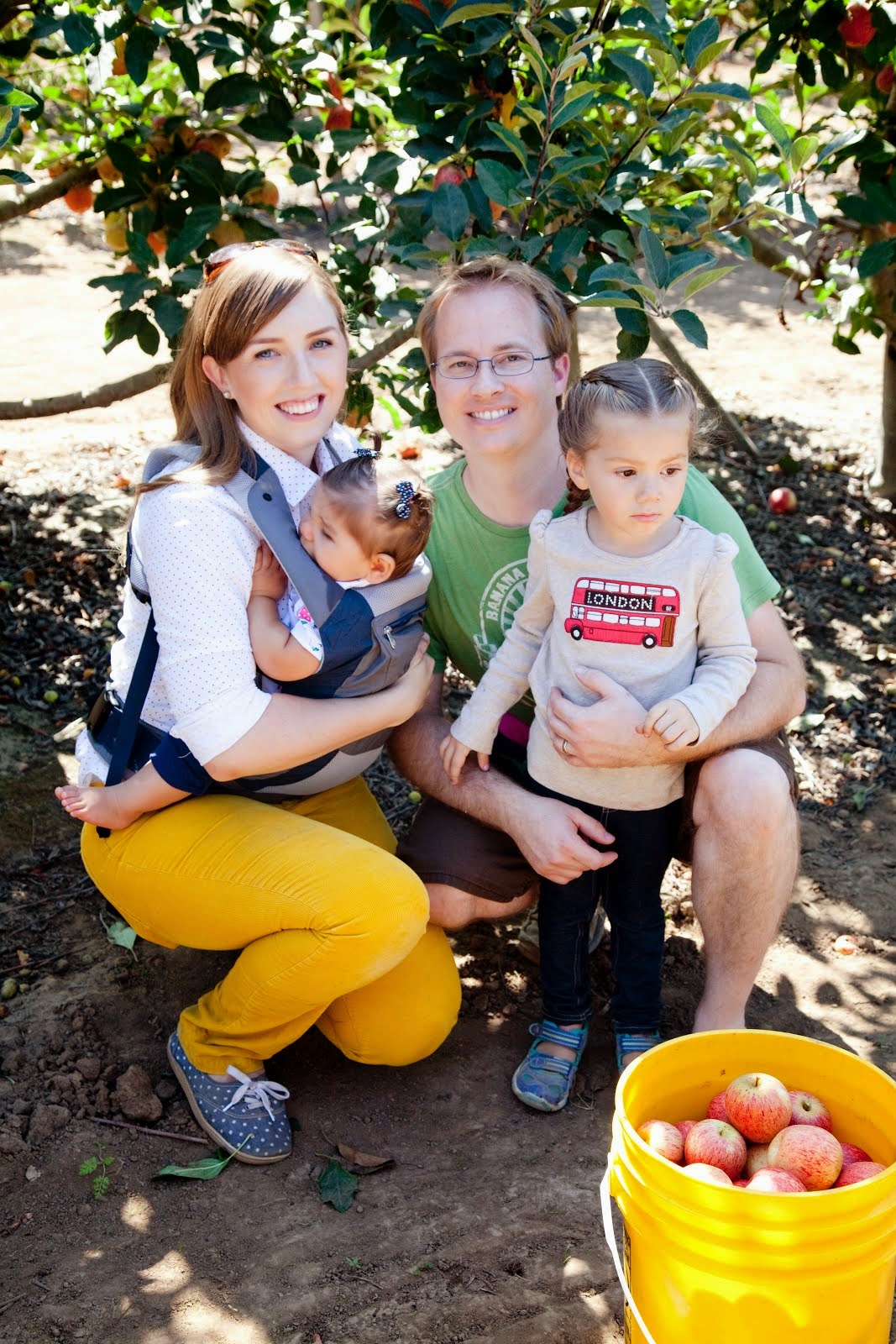 "Be who you are and say what you feel, because those who mind don't matter, and those who matter don't mind." - Dr. Seuss

"Our doubts are traitors and make us lose the good we oft might win, by fearing to attempt." - Shakespeare